I’ve been keeping an eye on the upcoming game, Skyclimbers, as I backed it during its Kickstarter campaign. Despite the ostensibly foolish decision to back a multiplayer computer game via crowdfunding, I thought they had a solid concept and a significant amount of work already completed. 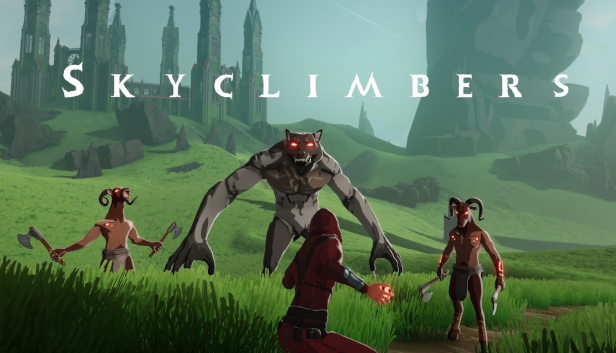 There are a lot of comparisons to be made with existing games, and for good reasons. I’m hoping, well, expecting Skyclimbers to transcend those comparisons when it makes it to full release. I fear it will try to be too much for too many, and simply fail to be much more than a tech demo. But that could be me just projecting my own lack of discipline on completing projects onto others (see: this website).

Skyclimbers will have beast taming elements, survival elements, base building, city building, kingdom management, PvP/PvE, and RPG elements. That’s a lot of elements. Thankfully (and I’m listening to the lead dev right now ranting about overreaching), they are staying out of the MMO realm, for now. They will still have an online element, but it will be more akin to Minecraft or Valhiem, where there are just a few others on the server with you, not hundreds (or thousands).

Of all of these elements, I’m most interested in the survival/building elements. I’m curious to see how they will handle the transition from a small single-person base to a village to a city to even a kingdom. How will the mechanics change, how will base management change? When it’s just you, you are the cook, the smith, the tailor, the sheriff, the doctor and the dog catcher. Do you have to still do all that? Do you have to micro-manage your populace? Can you choose to specialize your own skills to support/supplant your own craftspeople, or will they handle all but the most basic of crafting?

One aspect I have mixed feelings about is the non-deformable terrain. It’s been made clear that the actual terrain is sacrosanct. Vegetation is fair game, but the only way to alter the ground is to build on it. From a technical standpoint, I completely understand. When you have a procedural world, the terrain is, quite literally, formed wholly from a single seed value. Every deviation from that procedural generation is a datum that needs to be tracked. From what I understand, that’s impacting some players in Valhiem, and I know No Man’s Sky has a cap on how much terraforming you can do in your universe before it starts “erasing” the edits you made. But, on the other hand, I also like the idea of shaping the land to my liking for my construction. We’ll have to see how building with the terrain works.

I’m not as gung-ho about the beast taming, although I certainly think it looks interesting. I hope that the different dynasties/biomes/elements have their own common, uncommon, and rare beast, and that rare doesn’t mean nearly impossible to get. And certainly not pay-to-win (they’ve already been pretty vocal against microtransactions and cash stores). This could be a really cool mechanic, I look forward to see how it ends up being implemented.

I appreciate the initial focus on PvE content. That’s my focus. Probably from my time in EverQuest, World of Warcraft, and EVE, where PvP can devolve into some really unpleasant environments for people who aren’t interested in it. It’s not my cup of tea, and I find that PvP is more toxic that it’s worth for me. I’m hoping that as the game develops, PvP remains fully opt-in, and the only content that’s made exclusively available to PvP players is the Void allegiance (which may, I suppose, include access to alternate, but hopefully appropriately leveled, equipment) and the actual mechanics of targeting and damaging other players.

I suppose I should take a moment to mention the various dimensions of the game. Most fantasy RPG-ish games have race/class/alignment dimensions, with a seasoning of guild or kingdom allegiance. Skyclimbers will be a bit different. On initial release (there are plans on expanding these lists), there will be four Dynasties, which will have unique architectures and cultures, and are based loosely on real world inspirations. There will also be five classes, with relatively parallel abilities between dynasties. Amid all that, there are also nine elements that can have an impact on how well various effects interact. The lore of the world will have an outside force infecting the worlds of the system, and you can (and probably should) seek out and purge the incursions that will crop up, before they can fester and grow. For PvP servers, players can choose to align themselves with this dark faction (the Void), or with the protectors of the system (the Shoi). There will also be an antagonistic tribe for each dynasty that will be a non-story thorn in your side (from the looks of things). So lots of different facets and combinations to play with. The plans are to expand the number of dynasties to nine, and to add more classes. The number of elements is even somewhat open ended (“There are nine known elements”).